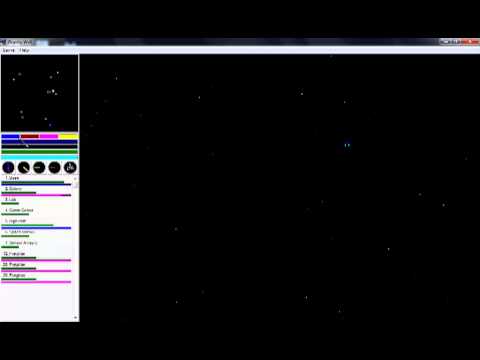 Gravity Well is a very old PC game dealing with interestellar wars. You control one of four races to gain control of a sector by flying through space and claiming planets as yours. You build bases and colonies in such planets, and produce materials to create ships called freighters that delivers materials to other planets and thus your civilization is expanded. Gotta be careful, for you are not alone, and others will try to achieve the same goal!

The drawback used to be the necessity of buying a license. Without it, you were limited to destroy beat and destroy only ONE of your three enemies in the sector. The license, if I remember well, used to cost around $30 dollars, and payment was made in the old fashion way of sending a postal letters with the money inside (we are talking about the 90s!).

There is, however, a trick to be able to kick everyone’s asses in space and gain control of all planets… before any one of these enemies actually (and *officially*) gets destroyed!

I show this on the video as part of the gameplay. Straight to the point: just destroy their colonies and labs, and leave ONLY one of their freighters untouched (be sure the freighter does not carry material). If you do this, their civilizations have no colonies to produce materials and expand in the sector, nor any labs to create fighters (which can annoy you sometimes if you wish you try this). As long as one of their freighters is still wandering around, the game does not stop you from playing and asking you to buy a license.

This might bring memories to some of you, and realized that never found a video of this on youtube. So here it goes….. enjoy! 🙂

This version’s sound effects do not work properly on the newest windows’ operating systems.. you might notice this during the video.